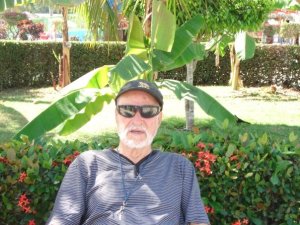 During my customary six month migration to Mexico I was invited to visit my nephew at his ranch who on this occasion was entertaining a number of beautiful Miss America contestants. I parked my motor home beside the horse rail fence and was invited inside to view his 6 by 6 foot television and catch a hockey game, his favorite sport. I got bored quickly and begged to be excused to look at his horses. He nodded his consent. A beautiful young lady asked if she could join me. I presumed hockey wasn’t her favourite sport either. Now outside I asked her if she would like me to show her how to feed a horse without getting bitten. She was excited by this prospect so I went to my nearby motor home and retrieved an apple from the fridge cutting it into sections.

I returned to the young woman and took her delightful arm in my hand and on her upturned hand placed a slice of apple and told her to offer the flat of her hand to the horse. The damned horse sniffed the apple but refused to take it. To make up for the horse’s refusal I pulled her hand towards my mouth and took the apple as if I were a horse kissing her palm in the process. I thought I had been very clever, until that is I started gagging on the apple, I couldn’t get the apple down. The young lady’s eyes were round and she had a startled look on her face. I rushed to my motor home and gulped a large amount of milk to dislodge the stubborn apple. I emerged composed and explained to the lady that an apple seed had gotten stuck in my throat. We both had a great laugh about it, whether from the milk or the laughter I found myself quite hungry and decided to fry myself a bacon and tomato sandwich to which the lady asked if she could have one also, of course I obliged her.

I stepped into the motor home and collected all the necessary ingredients as well as my propane stove I placed all of these on a folding table outside and began to do my chef thing. That was the moment my nephew emerged wondering what had happened to us. It was quite obvious that I was in the process of preparing a snack. He then mock angrily exclaimed that he had the most modern of kitchen equipment inside and here we were in his driveway making bacon and tomato sandwiches on a propane stove. We looked at ourselves then at him until he cracked a smile and said that we should make one for him and make sure to burn his bacon.